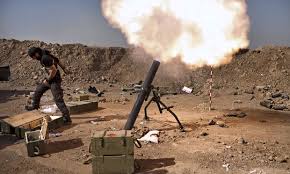 According to Jalaa Hospital said two civilians, one of them a child, were injured yesterday as a result of such shelling.

Seven-year-old Saja Mohammed Ferjany was injured in the foot by shrapnel at her home in Buhdeima while Ali Mohammed Ali, 28, was injured by shrapnel in Hay Shuhada Zawiat (previously Hay Fateh)

The two areas are close to Leithi, scene of continuing clashes.

On Thursday, three civilians were killed as a result of indiscriminate shelling and shooting almost all of which is being blamed on Ansar Al-Sharia and its allies.

One has been named as 70-year-old Mohammad Ali Musa, from West Salmani, shot in the heart by a random bullet. The other two were Egyptians: Omran Abdul Khaliq Hamida, 38, and Hussain Syed Zain (64). Both were killed when a random missile exploded.

On Friday, three civilians were rushed to hospital after being wounded in separate random attacks.

Even Benghazi’s hospitals are not immune. A mortar shell today hit the top floor of the second block of Benghazi Medical Centre. Fortunately, no one was injured although there material damage.

It is not the first time the BMC has been hit but it continues to operate despite the dangers.

It is also reported today that two soliders were killed and five others wounded in the fighting in Leithi. The dead have been named as Otman Imhemed Al-Burnawi, 22, and Moutaz Rajeb Jawad Al-Hassi, 32 – the latter a volunteer with the army from Leithi. He is said to have been shot by a sniper.

Last week, the hospital reported receiving two dead soldiers and 13 wounded. In March, it said, it had received 23 dead and 204 wounded.