You are here: Home / Mediterranean / Libya races to protect its antiquities as Islamic State expands to North Africa 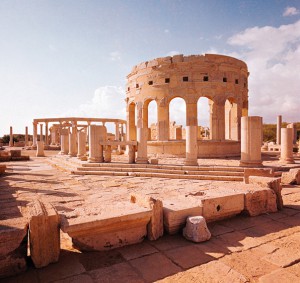 Libyan antiquities officials are growing increasingly concerned over the threat of ISIS spreading its reach in North Africa, AFP reports.

Meanwhile in Libya, the country has descended into civil war and sectarian violence following the toppling of Muammar Gaddafi. The North-African state now has two governments and parliaments; while the Islamist Libyan Dawn party controls the capital city Tripoli, the internationally-recognized government has been forced to relocate to the east.

Cultural officials fear that the rise of ISIS in the region, combined with the existing environment of instability, poses a serious threat to the country’s cultural heritage. There have already been reports of widespread looting of treasures.

Libyan Antiquities Chief, Ahmed Hassan, admitted to AFP, “We fear that the hands of the extremists will extend to our heritage, like in Iraq.”

None of Libya’s five UNESCO listed cultural heritage sites are sufficiently fortified for protection from looting or damage. According to the Libyan archaeology expert Fadl al-Hasi, over fifteen ancient sites have already been looted or irreparably damaged.

In November last year a colonial-era statue depicting a woman stroking a gazelle suddenly disappeared from Tripoli (see Iconic Nude Statue Stolen in Tripoli). Dozens of antiquities have been looted from the town of Sirte, west of Tripoli.

Mohammed al-Shelmani, head of the archaeological department in Benghazi, revealed plans to evacuate Libyan antiquities and appealed to the international community to provide aide before it’s too late. “We have to remove all of our artifacts; document and store them in a safe location as well as asking UNESCO for help in preserving our history.”

Although the Director General of UNESCO Irina Bokova called for “all parties, as well as the Libyan population, to commit to and act for its [Libyan heritage] safeguarding,” UNESCO has not yet provided concrete plans for assistance.