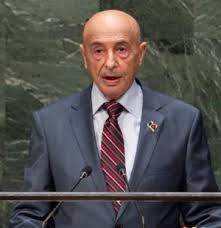 It was unacceptable for the international community to turn a blind eye to terrorism in Libya, the president of the House of Representatives (HoR) Ageela Saleh told the United Nations General Assembly today.

Speaking in New York, Saleh said that either sanctions were imposed on those who were obstructing the country’s political progress and security, or the international community should make it clear that Libya was on its own in the fight against terrorism. He called for  “genuine and active cooperation” from the outside world against terrorists.

Saleh said the world needed to be supporting the elected and legitimate government and enforcing the UN Security Councils Resolution 2174. This calls for the accountability of all those who use violence against civilians and civil institutions.

He went on to warn that the international arms embargo on Libya was depriving the Libyan armed forces of the weapons and training that they needed to combat terrorism.  The terrorist destabilisation of Libya threatened regional relations and global peace.

Saleh also appealed for the international community to help regain control of Tripoli and bring about the withdrawal of militias and armed groups from state institutions. He went on to urge the isolation and sanctioning of institutions that were not subject to the control of parliament and the government