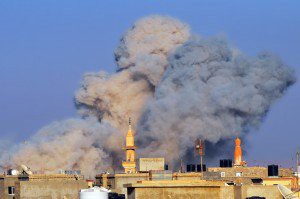 A witness told the Libya Herald: “There is no doubt that these bombs are different. I have not seen them before. They are bigger and their impact is greater”

Fighting on the ground continued but with no great intensity. No casualty figures were available. It is not clear if the government airstrikes on Sabri yesterday also involved the new bombs