You are here: Home / Mediterranean / Libya: new report shows that abductions by armed groups is rampant 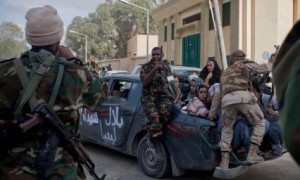 Rampant abductions by armed groups have become a part of daily life in Libya, said Amnesty International today (5 August) as it launched a new report – ‘Vanished off the face of the earth’: Abducted civilians in Libya – calling for an end to the epidemic of kidnapping in the country.
More than 600 people have gone missing between February 2014 and April this year according to the Libyan Red Crescent Society, and the fate and whereabouts of at least 378 remain unknown, though the real numbers are likely to be much higher.
Those abducted include activists, public officials and other civilians seized by unknown assailants based on their political affiliations or in relation to their work. People abducted have been routinely tortured in detention, with many held blindfolded for several days, verbally and physically assaulted, threatened with death and often tortured with electric shocks. Several have died after being tortured or were summarily killed – their bodies later dumped on the side of the road.
Among those abducted and still missing are 71-year-old former General National Congress member, Suleiman Zobi, and Abdel Moez Banoun, a political rights activist and blogger, who was kidnapped from a parked car near his home after speaking out against the presence of militias in Tripoli and organising protests about this. Banoun has been missing for more than 300 days and his brother has said he had “vanished off the face of the earth”.
Another of those abducted is Nasser al-Jaroushi, a prosecutor, who was kidnapped after investigating the murder of human rights activist Salwa Bugaighis, as well as looking into criminal drug gangs. Humanitarian aid workers Mohamed al-Tahrir Aziz, Mohamed al-Munsaf al-Shalali and Waleed Ramadan Shalhoub were abducted on 5 June as they were on their way to distribute supplies to towns affected by fighting in south-west Libya.
Others who have faced abductions include migrant workers, foreign consular staff, and members of the Tawargha community who were displaced in large numbers from their hometown in 2011.
Hostage-taking of civilians is prohibited under international humanitarian law and during a conflict amounts to a war crime, and Amnesty is calling on the international community to increase its support to the International Criminal Court to investigate war crimes and crimes against humanity in Libya. So far the ICC Prosecutor has failed to undertake any investigations into such crimes committed by armed groups since 2011.
Amnesty International’s Acting Middle East and North Africa Director Said Boumedouha said:

“Civilians in Libya are living on a knife edge. Widespread lawlessness and chaos have been exacerbated by routine abductions, as armed groups tighten their stranglehold on the country.
“Hundreds of civilians have been abducted on a whim simply because of where they are from, or because they are believed to support a rival political group. In many cases, they are kept hostage to pressure an armed group into a prisoner exchange or to coerce the family to pay a ransom.”

The ongoing UN-sponsored political dialogue which aims to end the violence and form a Government of National Accord also plans to address abductions and illegal detention as part of a set of confidence-building measures. Participants to the dialogue, including local municipal leaders, must now exercise their influence with commanders of armed groups and intervene for the release of all abducted civilians, said Amnesty.