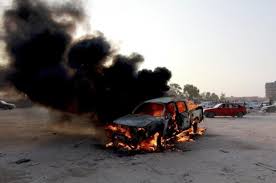 A bomb car exploded in Tobruk, outside the building housing both the new locally-based Libya Wataniya TV and military intelligence. There was some material damage and one person was slightly wounded. He was taken to Tobruk Medical Centre, wrote LibyaHerald.

The vehicle, a grey BMW, driven by a young man said to be in his 20s, had stopped at end of the perimeter wall outside the building, officials said.

“The building’s guards fully deployed in front of the main gate, so the driver went to the end of the wall of the building,” it has been disclosed

Military intelligence and security agencies in Tobruk are now reported to working to catch the culprit.