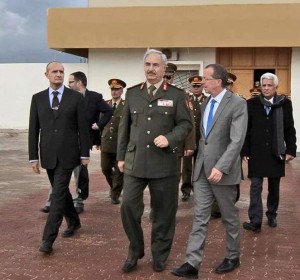 Moscow has condemned UNSMIL chief Martin Kobler for what it says his exclusion of Khalifa Hafter from the political process, like reported by libyaherald.com .

In written answers to questions put by Bloomberg, Russian deputy foreign minister Gennady Gatilov has insisted that Hafter must have a leadership role in a united Libya. He said that UNSMIL had been favouring other political forces and excluding Hafter.

“We believe that the Libyans have to find a compromise on his [Hafter’s] participation in the new Libyan leadership” said Gatilov.

Since Kobler’s first and apparently only meeting with Hafter just over a year ago,  the UNSMIL chief has insisted that Hafter has blocked all attempts for further encounters.

In the last three months Kobler has begun to say that Hafter should indeed be playing a role in the new Libyan Army but insisted that in that capacity he would be subject to the control of the Presidency Council which would assume the supreme command of the armed forces.

It is the Libyan Political Agreement’s removal of this control from the House of Representatives and the armed forces commander-in-chief whom it selects, that has been one of the key reasons  parliament has held back from voting to change the Constitutional Declaration.

Though expressing concern over the fate of non-combatants trapped in the Ganfouda terrorist enclave in Benghazi, Kobler and some other ambassadors have also praised the Libyan National Army’s “fight against terrorism”.

Gatilov’s statement is being seen as the strongest support yet for the HoR and Hafter. It follows from two Moscow trips by Hafter in six months, the last at the start of December.

Yet Russia has given every indication that it remains committed to the international arms embargo. It also insists it is committed to the Libyan Political Agreement, under which the Government of National Accord proposed by the Presidency Council cannot exist until its ministers have been approved by the House of Representatives.

Gatilov told Bloomberg that Hafter had been “doing a lot to fight Islamic State terrorists and help the government restore control of oil production…Hafter is of course a leading political and military figure.”

The Russian focus on the Libyan National Army’s fight against terrorists, mainly in Benghazi was echoed today by the French ambassador in Moscow Jean-Maurice Ripert who said that France was united with Russia over Libya and the need to combat terrorism.