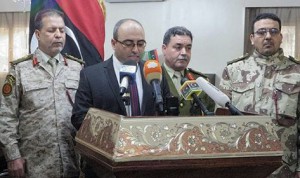 Misrata Municipal Council has threatened to withdraw from the UN-brokered dialogue because it says “the other side” is not committed to the process, wrote LibyaHerald. It claims it is undermining it by its military campaign in the west of the country.

At a press conference yesterday, supported by the city’s military council, it said it was seriously thinking of pulling out.

According to the Misratan officials, the cause for the resentment and frustration is not so much the bombings and military action west of Tripoli, although that is important. It is the belief that the House of Representatives, the Beida-based government and the Libya National Army have shown that they were not interested in the negotiations.

These are, the Misratans officials have said, still the only assured route to peace in Libya.

In another sign of Misratan exasperation, there have been reports that the largely Misrata-based Operation Sunrise force, which a fortnight ago pulled back from Ben Jawad and Sidra following an agreement with Ibrahim Jadhran’s central region Petroleum Facilities Guards, are also threatening to return.

It follows the announcement by Prime Minister Abdullah Al-Thinni that foreign oil companies and traders must stop dealing with the Tripoli-based officies of the National Oil Corporation (NOC) and make payments for oil purchases to a new bank account in the UAE.

The move, long expected, would give the Beida-based government total control of Libya’s oil revenues and deprive those connected to the GNC/Libya Dawn-controlled administration in Tripoli of any funding.

In a statement, Sunrise spokesman Ismail Shukri Al-Shukri was quoted claiming that the withdrawal had agreed as a confidence building measure for the dialogue process. Selling oil outwith the control of the Tripoli-based NOC was unacceptable and the oilfields would have to be protected, he warned.