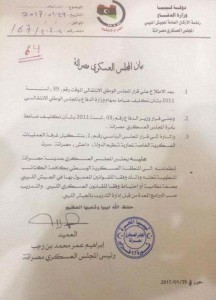 All Misrata brigades operating under Misrata Military Council will join the Central Military Zone of the Libyan Army, the council announced, a step that aims to unite the most powerful armed brigades in the country under one command, like reported by libyaobserver.ly .

The inclusion will be according to the laws in force of the Libyan National Army, the military council said in a statement.

The statement pointed out that Misrata brigades would join as regular or reserve forces in accordance with the legislations of the military institution.

“This action could be described as a reaction and attempt to reinstate an authentic version of a military institution, which is universally known to have loyalty to God and country, not private protection units and militias similar to those employed by rogue General Khalifa Haftar and his predecessor Gadaffi before him.” A military source has explained.