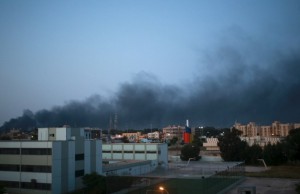 A militia alliance that controls Libya’s capital has carried out air strikes against ISIS positions in the coastal city of Sirte, an official said.

“A Fajr Libya warplane launched several raids on Thursday evening against sites where there were members of the Libyan branch of the Islamic State,” an official in the town, who did not want to be named, told AFP.

The targets included an ISIS command base set up in a conference center where the late leader Moammar Gadhafi once hosted international summits in what was his hometown, the official said.

Fajr Libya is a coalition of militias, including Islamists, which controls Tripoli, where it has installed a government and a parliament opposed to the internationally recognised legislature and cabinet.

Heavy fighting has raged between ISIS and a Fajr Libya battalion in Sirte, located 450 kilometres (280 miles) east of the capital, since Wednesday evening, according to a spokesman for the militia.

There have been sporadic clashes for about two months between ISIS and the battalion, tasked by the Tripoli parliament with restoring security in the coastal city.

The internationally recognised government fled to the far east of the country after Fajr Libya seized the capital in August.

The turmoil has allowed ISIS to gain a foothold in the oil-rich North African state, where the extremist group has executed dozens of Christians.