You are here: Home / Mediterranean / Libya ‘militia commanders’ killed in helicopter crash: it had been “shot down” 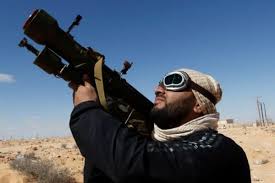 At least 12 people have been killed in a helicopter crash near the Libyan capital Tripoli on Tuesday amid reports the aircraft had been “shot down”.

The helicopter had been carrying cash for a local bank and was making its return mission to the capital with high-ranking militia members and bank workers among the 23 people on board, officials told AFP.

A militia spokesman told the BBC that it had been “shot down”.

The aircraft came down to the west of Tripoli in the Al-Maya coastal region, which has recently suffered violent clashes between rival armed groups in recent months.

It is thought that several commanders of the Fajr Libya (Libya Dawn) were on board.

Fajr Libya has been one of the groups warring with Libya’s internationally recognised government, which has taken refuge in Beida in the east of the country.

Libya has seen lawlessness and clashes between different militia groups in recent years since the 2011 overthrow of Muammar Gaddafi.

The chaos in the country has seen a steady flow of refugees leaving Libya for Europe, with an Islamic State of Iraq and the Levant (Isil) offshoot taking hold of the city of Sirte in the middle of the country.