You are here: Home / Mediterranean / Libya military says Turkish vessel shelled after warning: weapons for rebels on board? 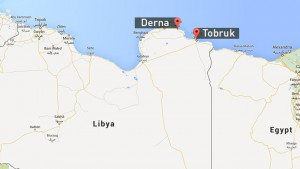 A Turkish vessel shelled off the Libyan coast was bombed after it was warned not to break a ban on approaching the eastern city of Derna, and was later towed into Tobruk port, the Libyan military said on Monday.

“A ship was shelled about 10 miles from Derna coast. We have warned before about approaching Derna port,” Mohamed Hejazi, a spokesman for forces with Libya’s internationally recognised government, told Reuters.

“A member of the crew was killed, and there is one wounded,” he said.

A military source said the vessel was on fire and now being towed in Tobruk terminal.