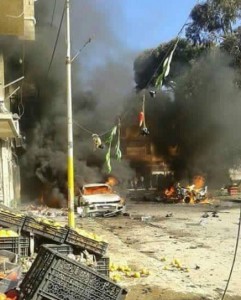 A car bomb has exploded outside a mosque in Benghazi wounding up to 17 people, two of them seriously. Reports that one has since died have not been confirmed, like reported by libyaherald.com .

Former interior minister Ashour Shuwail and his son Sulaiman were among the wounded. However, neither were seriously injured, a member of the family told the Libya Herald although it has since been said that Sulaiman is in intensive care.

The car bomb went off as worshippers were leaving the Abu Hourira mosque in the city’s Al-Majouri district after Friday prayers. It is not known to whom the car belonged nor the intended target although it is suspected that it was Shuwail.

Highly regarded throughout the country and considered by many as the man they would like to be prime minister, he tried to take to tough line on the then growing threat from militants, particularly in Benghazi and Derna while interior minister but was blocked by others in the cabinet. In the end he resigned, although technically he did so over the Political Isolation Law.

In 2013 and 2014, car bombings and assassinations, particularly outside mosques after Friday prayers, became all too rife in Benghazi. These tailed off after the start of Khalifa Haftar’s Operation Dignity targeting Islamist militants who were widely suspected of being behind them. However, there have been fears that the city would see their return with the militants now largely defeated and forced out of their enclaves.