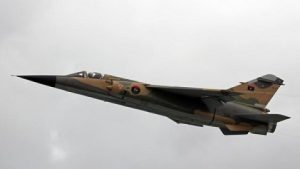 No details on casualties or damage were provided by the LNA. In a separate earlier incident on Sunday LNA airstrikes targeted positions of what the LNA alleged were hostile Chadian militias near Torbou (A key illegal migration passage) located between Um Aranib and Zueila village, where a makeshift palm hideout used by foreign militias was targeted.

It will be recalled that the CCMSR opposition militia group itself splintered from another Chadian opposition militia group, the Le Front pour l’alternance et la concorde au Tchad (FACT). FACT itself has been involved in the fighting in Libya. FACT had been targeted in its makeshift barracks in Doualki near Sebha on 14 April 2016.

The UN Libya Experts Panel report blamed foreign interference in Libya for the failure of the two Libyan sides to achieve reconciliation that is being mediated by the UN.

It will be recalled that the Presidency Council (PC) formed Ceasefire Committee arrived in Sebha from Tripoli on Wednesday and commenced peace talks between the warring Tebus and Awlad Sulieman tribes.

LNA forces started arriving at the Tamenhint and Brak Al Shatti airbases Friday morning with military logistics and armoured vehicles as part of the LNA’s “Law enforcement” operation in reaction to the ongoing fighting in the south of Libya.