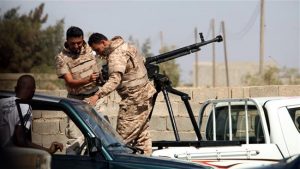 Libya National Army (LNA) forces on Wednesday clamped down their control of the eastern port city, Derna, with the local council urging all role players to take up the responsibility of keeping civilians safe, like reported by aawsat.com.

Derna was one of the established strongholds for extremists.

City head council, supporting the Tripoli-based Government of National Accord (GNA), claimed that Derna’s humanitarian situation is short to catastrophic and life-threatening.

The chief described the LNA-imposed siege on the city as equivalent to genocide. For the past week, all roads in and out of the town have been blocked. Three days ago, faced with deteriorating conditions and fearing a humanitarian disaster, Derna’s council of elders issued an appeal.

“The town is being slaughtered in cold-blood by the siege. We call on all to put an end to it,” it said.

On the other hand, the ultra-hardline Shura Council of Mujahideen in Derna announced that their affiliated militias are more than prepared to respond to the recent LNA-led offensive.

Speaking in a televised broadcast, a Mujahideen in Derna spokesman said LNA forces were preventing food supplies and medical aid from being delivered to the city, which is home to about 120 thousand people.

Defending his group’s position, the spokesman said that “LNA have no right to guardianship over the people of Derna,” and stressed that the Mujahideen factions “will not allow LNA forces to enter and shed blood.”

The Shura Council of Mujahideen in Derna was created by former Libyan Islamic Fighting Group member Salim Derby on 12 December 2014. Besides seeking to implement strict social mores in Derna, the alliance is known for its open opposition to LNA Chief Field Marshal Khalifa Haftar and the Libyan ISIS affiliates.

LNA forces publicly launched an extensive ground operation to liberate the city from the grip of militias, which have controlled Derna for nearly four years.

Colonel Ahmad al-Mesmary, LNA spokesman, announced that a military aircraft destroyed a militia-linked bulldozer based near the city’s coastal line on Monday evening.

In a brief statement, Massmary confirmed that the bulldozer was manned by terrorists and safeguarded ammunition and weapons.