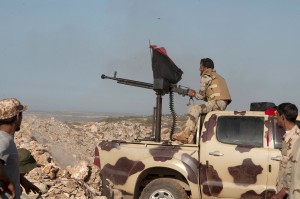 The Libyan National Army (LNA) says it made progress yesterday in the battle in south Benghazi’s Ganfouda and Gwarsha districts and now fully controls Tripoli Road separating them, having destroyed all the militants’ checkpoints along it. It also says that 12 Sudanese nationals being held by the militants as human shields in Ganfouda managed to escape. However, it also says that that there are still 180 foreign workers of various nationalities held prisoner in the district.

According to a spokesman for Saiqa Special Forces, the 12 Sudanese managed to escape under cover of darkness during the night and make their way to LNA lines. As well as being used as human shields, the Sudanese reported that they and others were forced to work for the rebels, transporting arms and equipment for them.

The LNA also says that it discovered a field hospital used by the militants with lists of names of those who were treated there and a bomb-making factory at one of the farms in Gwarsha.

Claiming that the militants were now fully surrounded with their supplies cut off, the LNA added that yesterday it bought in a mine flail machine from Ajdabiya to make a safe path into Ganfouda which has been extensively mined by the militants.

Many LNA fighters have been blown up by mines. Four more were reported killed yesterday, although the exact circumstances have not been disclosed.

Yesterday also saw continued air strikes against the rebel positions in both districts. The LNA later said that several militants’ bodies were lying in Ganfouda and that they had removed one of them.