You are here: Home / Mediterranean / Libya: LNA advances on Misrata 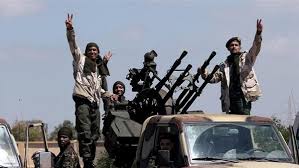 The Libyan National Army (LNA), commanded by Khalifa Haftar, continued its advance on the western city of Misrata as military officials seemed determined to enter the city ahead of any potential deployment of Turkish troops to the country, like reported by aawsat.com.

The move towards Misrata comes just days after the LNA captured the strategic coastal city of Sirte in a rapid advance preceded by air strikes.

The LNA moved beyond Sirte and captured new positions west of the city ahead of completely storming it.

A prominent LNA commander told Asharq Al-Awsat that demoralized Misrata militias that had fled Sirte were returning to their city.

The capture of Sirte was the LNA’s second rapid operation, he said on condition of anonymity, adding that the first such operation led to the liberation of oil ports.

“The situation is excellent. Our forces are advancing on all fronts amid the collapse in morale of the militias,” he added.

The LNA was, meanwhile, making advances on the capital Tripoli, against the Government of National Accord and its loyalist militias.

LNA media said its forces had captured positions in the Salaheddine area in southern Tripoli that were previously the frontlines of militias.

Head of the GNA, Fayez al-Sarraj, has yet to comment on the loss of Sirte.