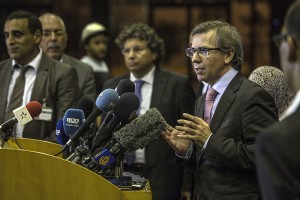 UNSMIL chief Bernardino Leon said that he expects that a National Unity Government  could be finalised as early as today afternoon. He told a press conference in the Moroccan resort of Skirhat that the GNC would be meeting today to put forward names for the roles of prime minister and deputy prime ministers and two other members of the presidential council.

Harking back to the UN General Assembly session in New York last Friday, Leon said that it had been an extremely important meeting.

“We immediately came back to Skhirat and we have been working since then. And we have very good news today because as you know the last participant in the dialogue that had to provide names and fully participate in this discussion was the GNC, and the GNC tomorrow morning at 10 am will have a session to propose these names. In the meantime, we have consultations with the other participants in the dialogue. We have been working for long hours yesterday and today. We will still work for long hours tonight”.

Leon added “We are really hopeful that the GNC will take this very important decision for the future of their people and tomorrow we will have these names, and that tomorrow, sometimes in the afternoon-evening, it will be possible to announce a proposal for a national unity government”.

Quizzed by journalists who wondered if he was not being overly optimistic, Leon replied that the prospects of agreement were good. “It is not a matter of optimism” he insisted. He pointed to the rival Libyan delegates who had been fighting each other but  who had gone to New York last week. “ They were sitting together and they were listening to the messages of the international community and they are here working with us [in Skirhat]”.

He said he was really hopeful that the GNC would provide a list of five names. “I think we have a lot of good news in the last days and it is on the basis of this good news we very much hope that tomorrow we will be able to complete this by reaching this agreement”.

“So, we can have already a clear picture of what the others can accept and we hope to have tomorrow a clear picture of what the GNC can accept and can propose” continued Leon, adding “So, it could be possible to make this announcement tomorrow evening and this is what we expect to do and this is what we will encourage them to do”.

Asked about the likely names Leon said that he had a much clear picture, if not about the names themselves, “at least about the profiles and the options, which are not infinite. It is a concrete list of names”.

Noting that thanks to social media, there were no secrets in Libya, Leon said that while he had a reasonable idea of all the nominees , he wished to be discrete and disclose none at this point. He said however, “Everybody is trying to propose names for a government that will be able to work together, people that can be efficient in their jobs and that can be part of a team, because as I have said many times, the problems in Libya cannot be solved by one person or two”.

He insisted: “We are really at the very end, and we have, we need this final step from the GNC, and I hope they will do it”.