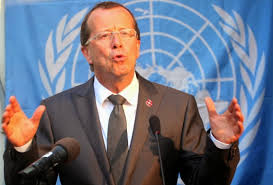 There are between 3,000 and 6,500 fighters with the so-called Islamic State (IS) now based in Libya and the number is likely to grow, according to UN Special Representative Martin Kobler.  Most, he said, were non-Libya Arabs and many had come to Libya recently from Syria and Iraq, taking advantage of the political vacuum in the country.

Speaking at a press conference yesterday in Madrid with Spanish Foreign Minister José Manuel García-Margallo, he warned that as IS found itself under growing pressure in Syria and Iraq, more would arrive. He warned too that IS could well be getting money from illegal sales of oil from Libyan fields under its control, although it had already resorted to the more simple funding method of theft.

Given the threat from IS, plus the humanitarian crisis where an estimated 1.3 million Libyans now require food aid, the Presidency Council and the House of Representatives had to assume their responsibilities and appoint a national unity government, Kobler said.

It would, he believed have between 12 and 14 members. The Spanish foreign minister said he believed that this could happen on Sunday, 14 February.

Kobler also reiterated that sanctions against those trying to prevent the appointment of a national unity government are not on the UN agenda at present, although the Europeans and Americans thinking about it. He also restated that security in Tripoli and the fight against IS had to be undertaken by Libyan not foreign forces, although the international community would provide support.

One of his main concerns now, however, was of “the political process being overtaken” by military issues.

Kobler’s statement about IS fighters in Libya differs from that coming from Sirte. While sources there also speak of increasing numbers of fighters, and particularly senior figures, moving from Syria and Iraq, they point out that the largest numbers there at present are from North Africa, particularly Tunisia. However, they also say that recently there have been significant increases in those from African Sahel states and Sub-Saharan Africa.