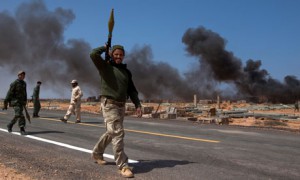 Jet fighters, thought to have taken off from Misrata hit Islamic State (IS) positions in Harawa and west of Sirte.

Harawa, on the coastal road, 70 kilometres east of Sirte, was taken over by IS forces nearly three weeks ago after prolonged negotiations with local elders. They agreed to surrender the town to the Islamists after appeals to Misrata to protect them had failed.

There are believed to be casualties in Harawa and at Sirte but no figures have been announced. IS never does so.

Despite the attacks on IS forces – there was one two days ago against Nufaliya on the IS eastern front line – they are seen as better organised and more professional than was the case in Derna.

IS boasted that it had graduated a batch of new recruits in Nufaliya.