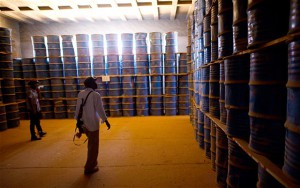 An Israeli air force jet allegedly bombed Yellowcake’s warehouses in Libya placed in a small airfield in the south of the country, near the city of Sabha, according to Arab media citing unnamed Libyan security sources.

According to the reports, the warehouses, which were completely destroyed, stockpiled weaponry purchased by Iran from Africa and were intended to be smuggled to Hamas in Gaza.

Yellowcake is used in the preparation of uranium fuel for nuclear reactors, for which it is smelted into purified UO2 for use in fuel rods for pressurized heavy-water reactors and other systems that use natural unenriched uranium.

Al-Watan further claimed that the jet flew through Egyptian airspace, where it was allowed passage.

Israel has not officially confirmed it carried out either strike.