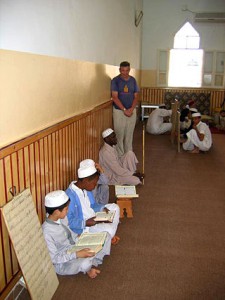 The growing influence of radical Islamists in Tripoli since Libya Dawn forces took control of the city has become clearer with changes to curricula in schools.

While Islamic studies have always been a standard part of the curriculum in Libyan schools, social media has been abuzz in the past week over the shift towards teaching more radical views of Islamic beliefs in secondary school religious classes. A worksheet circulating on the internet suggests that students are to be taught the value of jihad as well as about the importance of punishing those who choose not to follow Islam.

The Libya Herald showed a copy of the worksheet to a Tripoli resident who wished not to be named. He immediately expressed shock over the content and lamented that Libyan students are being “indoctrinated” with this kind of “propaganda”.

Last week it was reported that schools had been ordered to drop French and citizenship classes in Tripoli.  While the reason given – not enough qualified teachers to teach the subjects – rings true for French courses, it does not carry the same validity for citizenship classes.  Although there is no concrete evidence that the suspension of these two subjects indicates a growing Islamist presence, languages other than Arabic were some of the first classes ordered suspended after the Islamic State gained a foothold in Derna.

Meanwhile, there are rumours that University of Tripoli will be ordered to segregate in the autumn, forcing men and women to attend classes separately. A professor, who also wished not to be named, confirmed to the Libya Herald that she had been told this but did not think that it could be enforced.

Within the past couple of months Libya Dawn has also forced the segregation of Fursia park in Busetta, the large track and park facility on Al-Shat Road that is extremely popular with families. As of this writing, the park is open to women only for two days a week and to men only on the other days, preventing entire families from being able to enjoy the park together.