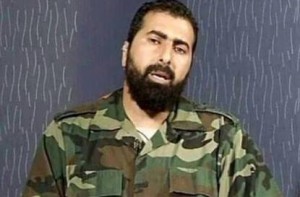 The leader of Derna’s Abu Sleem Brigade, Salem Derbi was seriously wounded in fighting last night between the Shoura Council of Mujahideen in Derna (SCMD) of which his brigade is a major component and Islamic State forces. There are unconfirmed reports that he died shortly being taken to hospital. It is also reported that 13 other gunmen have died in the fighting.

It broke in the west of the town out after two Abu Sleem commanders, Naser Al-Akr and Salem Al- Houiti, were murdered in the town, largely under the control of IS. The two were gunned down in Rashid Street by masked gunmen, believed to be members of IS, who then fled.

Following the killings, SCMD issued a statement declaring jihad against IS, and reportedly warning local residents to evacuate their homes.

Widely regarded as ideologically linked to Al-Qaeda, SCMD issued an ultimatum to IS last month, demanding it renounce its particular militant beliefs and stop killing other Muslims, or face the consequences. The ultimatum was read out by Derbi.

IS had already declared SCMD as apostate (murtad).

In last night’s declaration of jihad, SCMD says that IS had ignored the warnings and so now there had to be war.

Rivalry between the two groups of militants has been ongoing for more than a year. IS emerged out of what was the Shoura Council of Islamic Youth in Derna and it was condemned by the Abu Sleem brigade and Derbi in particular when it pledged its allegiance to IS.

The killing of Abu Sleem commander Mazig El Gabsi last July is also thought to gave been the work of the then Islamic Youth group.