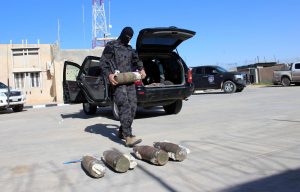 Terrorists from the Islamic State have tried to attack the Dhara oilfield, sources from the Libyan National Army told local media. The LNA confronted the terrorists before the attack occurred, seizing a car that contained five explosive belts and several improvised explosive devices, the sources said, which were ready to be planted along oil lines near a train route.

UK-based, Saudi-funded Asharq Al-Awsat said the news confirmed some information it had received from LNA sources last November that told of ISIS plans to strike targets in the Oil Crescent—Libya’s oil heartland.

Last month, this information was reiterated by a senior official from U.S. Africa Command (AFRICOM), spokeswoman Robyn Mack. “At the moment, we believe that the organization (ISIS-Libya) is likely to give priority to the restructuring of security forces and infrastructure, and to launch strikes, which may include targets in the Libyan oil crescent.”

Since September last year, the Oil Crescent has been under the control of the Libyan National Army, which is affiliated with the eastern government but working with the National Oil Corporation to protect the area from militant groups. An LNA general confirmed the AFRICOM information, saying that IS forces have made more than one attempt to enter the heart of Libya’s oil industry, but have thus far been repelled by the LNA.

The Dhara oilfield is operated by local company Waha in partnership with U.S. Hess, Marathon Oil, and ConocoPhillips. In December, Waha suffered a pipeline bombing that cost Libya up to 100,000 bpd in lost production, even though the company immediately diverted the flow of oil to the Es Sider terminal through another pipeline.

Although Libya has agreed to cap its 2018 oil production at the 2017 levels as part of its contribution to the OPEC production cut pact, the country has struggled to raise its production significantly above 1 million bpd—the level it reached this summer for the first time since 2013.