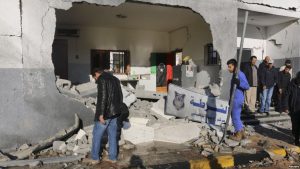 A woman was killed and five other civilians were wounded in an attack on a police station in eastern Libya that was claimed by the Islamic State group.

The attack occurred at dawn on Saturday while security forces were erecting a roadblock in Al-Qanan, 18km south of Ajdabiya, said the LANA news agency loyal to Libya’s eastern administration.

In a statement posted online, ISIS said its “caliphate soldiers” attacked the Al-Qanan police station and “violent clashes ended in the destruction of station elements”.

LANA reported the death of at least one person, a woman, and that five other passers-by were wounded during the attack on the police station.

IS said it was behind two attacks in the area on May 22, with a suicide attack against a checkpoint south of Ajdabiya killing at least two LNA soldiers.

In another incident some 200km south of the city, a soldier was abducted from a roadblock at the entrance to the city of Ojla.

In March IS claimed responsibility for two other attacks on LNA checkpoints in the region, in which a total of 10 people were killed.

Since the 2011 ousting of dictator Muammar Gaddafi, Libya has been divided by rival powers with Haftar’s forces dominating the country’s east.

A UN-backed unity government sits in the capital Tripoli, while numerous armed groups and jihadists are active in different parts of Libya.