You are here: Home / Mediterranean / Libya: Islamic State terror attack kills two and injures four at a checkpoint in Sabha 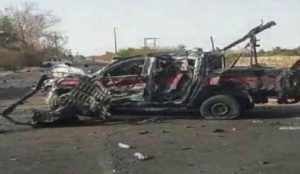 On Sunday, a truck exploded at a checkpoint in Sebha, southern Libya, killing at least two persons, including a senior police officer, according to local police, city officials, and doctors. The explosion was caused by a suicide bomber in Sebha, a security source claimed and according to libyanexpress.com.

Al-Senussi Saleh, Director of the Sebha Security Directorate, was quoted by Sebha Council as claiming that the vehicle used in the attack was a pickup truck (Canter) transporting a scrap automobile that turned out to have explosives hidden beneath.

He declared that the bombing of the Mazig checkpoint, north of Sabha and on the road to Brak, was a “terrorist operation carried out by a suicide bomber”, which killed two Directorate workers and injured four others.

Islamic State (ISIS) claimed responsibility for the attack late on Sunday and said that one of its terrorists rushed the control point and detonated the bomb that claimed two lives and injured more.

A decade of chaos and murder has been wreaked in Libya since the ousting of Muammar Gaddafi by the NATO-baked rebellion in 2011, but this year, after countless conflicts and failed transitions of power the country’s two main warring sides agreed to a new administration.

However, while the creation of a unified administration and an incentive for national elections in December is considered as the best hope for a long-term political solution, the process is still challenged.

Local armed groups are still controlling the majority of the land, international forces have not withdrawn foreign fighters from the front lines, while significant players dispute the management of the economic resources of oil-rich Libya.