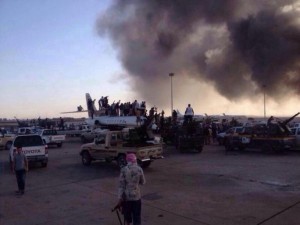 Libya’s Islamic State took control of a civilian air base in the central city of Sirte, a militia spokesman and an IS statement said, in the latest gains by the extremist group exploiting Libya’s lingering chaos.

The takeover of the al-Qardabiya air base occurred when a militia dispatched to battle the Islamic militants, who already control of much of Sirte, withdrew.

According to Mohammed al-Shamia, spokesman for the so-called 166 Battalion militia, his force retreated after calls for reinforcements from Tripoli went unheeded.

Nearly four years after the ouster of longtime dictator Moammar Gadhafi, Libya is consumed by chaos.

The country’s elected parliament and government were forced to relocate outside the capital to the far eastern cities of Tobruk and Bayda after militias linked to Islamist factions took over Tripoli last year.

The 166 Battalion militia answers to the umbrella group of Islamist-linked militias that control the capital, Tripoli.

The Tripoli-based factions and militias have so far been hesitant to get into armed confrontation with the Islamic State affiliate which has issued several statements describing them as “infidels” and urging their fighters to defect.

A statement posted by the Islamic State affiliate said the militant group seized the air base along with Gadhafi-era mega-project known as the Great Man Made River.

In addition to Sirte, the Islamic State group controls the eastern city of Darnah. In recent months, the IS militants have captured and beheaded dozens of Christian laborers and migrants, including Egyptians and Ethiopians.

They have attacked oil fields while trying to expand theirterritory to the east of Sirte but were repelled by local fighters.