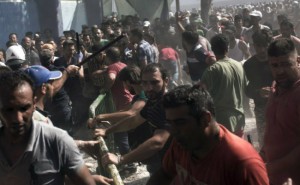 Extremists are taking advantage of thousands of desperate asylum seekers as they are forced to make the perilous journey from lawless Libya to the promised land of Europe.

Numbers using the Mediterranean route are set to double this year after the Balkans corridor was closed.

Under a new deal between Turkey and the EU to stem the flow of migrants, all refugees landing in Greece – the land of democracy – will be sent back across the Aegean Sea.

This means those determined to continue their journey are forced to make their way via north Africa – where ISIS terrorist are waiting with their desert and sea trafficking operations which generates a substantial amount of their income.

The sick terror group are said to command 130-mile stretch of coastal territory around Sirte and operate a training hub in the western city of Sabratha.

As penniless men and women refugees make their way through the land ISIS now controls, they are lured into the promise of cash, as they are paid to man checkpoints and outposts, protection and a roof over their heads.

The terrifying revelation has also sparked fears that ISIS will smuggle fighters across the Mediterranean to wreak terror in Europe.

A Libyan volunteer soldier warned: “On the main port in Sirte they have written a slogan: ‘From here we march on to Europe’.

“Sirte is the gateway – the West must understand that.”

It comes after a US airstrike on the Sabratha training camps, 60 miles from the Tunisian border, in February saw a drop in local fighters joining ISIS.

One Ghanian man, whose job is to funnel migrants to Libyan traffickers, said: “ISIS pay them as much as €1,000 a month, to encourage them to join.”

He said many arrive in Libya after crossing the Sahara desert from Niger or Chad and pay traffickers as much as £300 for help to slip in across the borders.

Adam, a migrant from Nigeria who is being held in a detention centre in Garaboli, said he knows many people who have taken up the jihadis on their offer.

He said: “People have risked their lives crossing the dessert, they are desperate.

“Someone comes along and offers them lots of money – and the stupid ones take it.”

Poorly equipped fighters from Nigeria, Somalia, Chad and Egypt are believed to be manning ISIS territory.

“ISIS also go to local farms in Sirte and tell migrant workers ‘We will pay three times what these guys are paying you’.

“That is how they recruit.”

ISIS is also using desperate migrants hoping to cross in to Europe to smuggle guns and drugs across the borders.

Last year an estimated 153,000 people, mostly from Eritrea, Nigeria and Somalia, crossed from Libya to Italy, according to Frontex, the EU’s border agency.

That was a tenth less than a year before because of the shift of Syrian refugees to the eastern Mediterranean route.

However with the closure of the Balkans, officials say the numbers will rise, which will play in to the hands of the evil terrorists.