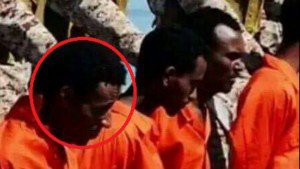 A people-smugglers’ convoy has been ambushed by IS terrorists and 86 Eritrean Christians seized.

The attack, near Oum Walid happened at four on Wednesday morning. Up to 100 migrants, some of them Egyptian were travelling on a single truck when it was stopped.

“There were about 12 Eritrean Muslims and some Egyptians”, Meron Estafanos, of the International Commission on Eritrean Refugees told the Libya Herald, “ They put them in another truck and they put 12 Eritrean women Christians in a smaller pick-up”.

The rest of the Eritrean Christians were loaded back on to the original truck but, said Estafanos,  as it drove off, some men managed to leap from the back. Three of the first to escape heard shots but did not see if others had been hit or recaptured. Estafanos said she had spoken to the European-based brother of one of the three successful escapees who said they were safe but still trying to get out of Libya.

When the IS first stopped the truck, they demanded that Muslims should make themselves known. All who responded were quizzed on the Quran and their religious observance.  It appears that the terrorists unmasked at least one Christian who was pretending to be a Muslim.

Estafanos explained that increasingly Eritrean Christians were now  avoiding Libya in their attempts to make it to Europe.

“Ever since the kidnapping by ISIS in Libya last February,”  she said “many are taking different routes. Some go from Khartoum to Turkey, then Greece. Others are now leaving via Khartoum to Cairo, then Alexandria and from there by boat to Italy. I think we will see an increase towards Turkey and Cairo instead of Libya”.
In April IS posted a video showing the execution of 28 Ethiopians. However Estafanos told this newspaper that the clip had been edited and in fact 64 men had been murdered, including 72 Eritreans and the crime had been carried out in March.
“According to five teenagers who were forced to watch the beheading and the shooting, 80 migrants had been captured on March 4, all but eight of whom were Eritreans.  These included ten women and 13 teenagers and a ten-month old child”.
Three days later the terrorists “ forced the teens to watch the killing and asked them if they wanted to be killed like them or convert” said Estafanos, “Of course the teens decided to convert. They then started teaching them Quran. Five week later there was fighting in the area and five of the teenagers managed to escape”.
She said that the women had also managed to get away last week.“Unfortunately the toddler didn’t make it and no one knows the fate of the other eight teenagers”.