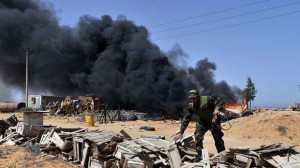 The Islamic State fighters in Libya have taken control of Harawa, a desert town 50 kilometers east of Sirte, news reports said on Saturday.

A source in the Libyan armed forces confirmed the town’s capture in an interview with Reuters, adding that  all local government buildings were now under IS control.Late last month the ISIL-affiliated fighters captured a key airport in central Libya. The militants took control of the al-Qardabiya airbase in Sirte after a local militia tasked with defending the facility withdrew from their positions.

The Islamist militants already control large parts of Sirte, the birthplace of former Libyan leader Muammar Gaddafi and a former stronghold of his supporters.

Libya is currently engulfed in a civil war nearly four years after the fall of Colonel Gaddafi.

The country has an elected government and parliament which has relocated to the east of the country in Tobruk and Bayda after Islamists took control of Tripoli.