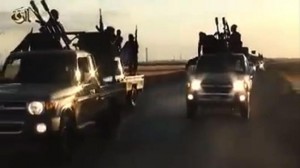 Confidential documents reviewed by Asharq Al-Awsat revealed a plan made by senior leaders in ISIS, Libyan Islamic Fighting Group, which is affiliated with al-Qaeda, and the Islamic Brotherhood in Libya to integrate into a unified “Shura Council”.

The documents reflect the existence of a state of confusion among the leaders of the extremist groups following the signing of the National Reconciliation Government agreement led by Fayez Al-Siraj. These organizations headed towards integration to limit the internal conflicts, which emerged between a number of their leaders due to external interventions.

According to documents, a meeting was held at Mitiga International Airport in Tripoli between Al-Madhuni Battalion commander and an envoy to the leader of ISIS, Abu Bakr al-Baghdadi, called Sufian al-Ghazali.

Security monitoring operations in Libya of the leaders of the three organizations since the beginning of last month have revealed their agreement on increasing their activity in the neighbouring countries, and expanding the operations of extremists in Egypt from Rafah and Sheikh Zuid in Sinai to Cairo and Alexandria.