You are here: Home / Mediterranean / Libya is battling against terrorism, mercenaries, Turkish colonization 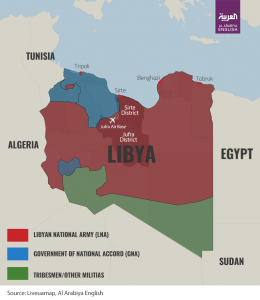 The Libyan National Army (LNA) is fighting an ongoing battle against terrorism and “Turkish Colonization” in Libya, said LNA spokesman Ahmed al-Mismari said according to alarabiya.net.

The LNA official said that the Libyan people comprehend and reject “Turkey’s expansionist ambitions to extend its influence over our country and the entire Arab region, with aggressive colonial motives, and to control and plunder our wealth to address its struggling economic crisis.”

For all the latest headlines follow our Google News channel online or via the app.

Al-Mismari said that Turkey was able to do this after “agents and traitors opened the way for them to capture our land and desecrate it, through direct military intervention, and by sending mercenaries and terrorist fighters from various global terrorist organizations, via the deal of shame and disgrace.”

Tensions have been escalating in Libya and between the countries which back the two warring parties in it, the LNA, commanded by Khalifa Haftar, and the Government of National Accord (GNA), led by Fayez al-Serraj.

Turkey, which backs the GNA, has also been ramping up its military intervention in Libya recently. Ankara has been providing air support, weapons and allied fighters from Syria to the GNA.

In November, Turkey signed a military cooperation pact with the GNA. The two parties also signed a maritime demarcation deal, which gives Ankara exploration rights in the eastern Mediterranean.

The maritime deal was rejected as “illegal” by many Mediterranean countries such Greece and Cyprus.

In early in June, Turkish President Recep Tayyip Erdogan said that his country’s support for the GNA “will increasingly continue.”

On Thursday, Turkey said that the GNA demanded Haftar’s forces to withdraw from Sirte and Jufra region as a pre-requisite for ceasefire talks.

Turkey’s intervention in Libya would give it a foothold in the natural-resources-rich Middle East, where its international ties to many countries are strained.

This is especially significant for Egypt, since it shares a long border with Libya, backs Haftar’s LNA and its relationship with Turkey has been tense for years.

On Saturday, Egyptian President Abdel Fattah al-Sisi said that his country has a legitimate right to intervene in Libya and ordered the army to be prepared to carry out missions if necessary.

He said: “Any direct intervention from the Egyptian state has now acquired international legitimacy,” adding that Egypt had received “direct threats” from “terrorist militias and mercenaries” supported by foreign countries.

Earlier in June, Egypt had called for a ceasefire in Libya, however, in his recent speech Sisi said that Egypt has always been reluctant to intervene in Libya but “the situation now is different.”

“If some people think that they can cross the Sirte-Jufra frontline, this is a red line for us,” he said.

The LNA spokesman thanked Egypt and Sisi for standing in solidarity with the people of Libya, and saluted all the Arab countries which supported Egypt’s stance, which he said “reflected the strength of Arab solidarity in the face of terrorism, and colonization.”