You are here: Home / Mediterranean / Libya: is a sniper at work in Sirte against Islamic State leaders? 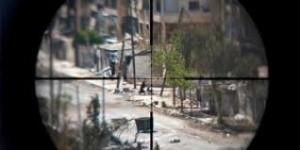 Today it was being reported that a lone sniper in Sirte, who had operated in Tripoli to deadly effect in the last days of the Qaddafi regime, has today killed the third member of IS in ten days.

According to unconfirmed social media reports, an IS commander,  Abdullah Hamad Al-Ansari, who comes from Obari, was killed by a sharpshooter on Saturday as he left a city centre mosque. Ansari was rushed the hospital where he died.

There are reports of subsequent intensive IS searches for the sniper in nearby buildings, but it is being said that the triggerman was not to be found. It is being claimed that Ansari was his third victim in the last ten days, though no details of his other two victims are clear.

The sniper, whoever he is, has already acquired an unlikely reputation on social media. He is being fingered as the unidentified individual who in 2011 wreaked havoc in Tripoli among Qaddafists in the closing days of the regime.

Sniping is a very specialised art. Besides the ability to stalk and home in on a selected target, with all the essential preliminary intelligence that that requires, a sniper also needs both initial concealment and a feasible evacuation plan once the shot has been taken. If it is indeed the case that there is a sniper operating in Sirte, then it somewhat undermines the IS claims that they have total control of Qaddifi’s old home town. The killer appears to have been able to disappear into a safe location.

One military analyst told the Libya Herald: ” There are all sorts of sniper weapons out there. The Americans tend to go for heavy, stable killing platforms whereas the Russian Dragunova is the exact opposite. You could shin up a tree, take your shot and be back down again with no great effort”.