You are here: Home / Europe / Libya is a jump-off point to send Islamic State fighters to Italy and Europe 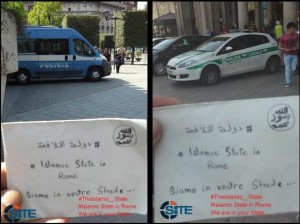 Intelligence sources on the ground said at least 30 ISIS fighters have been “picked up” in Italy by the Italian military in the recent weeks.

The captured militants claimed to be refugees, a disguise that American and European authorities believe enables ISIS militants to come to Europe “virtually untouched.”

“There is no way you can block it,” Fox News quoted an unnamed source as saying. “Libya is now an easy entry point into the EU and ultimately into the US for ISIS. They are saying, this is the way to America.”

“It’s a new ISIS route to the West,” a special operator in the region said.

The Libyan government, which has little control over its territory, has even captured ISIS militants with ease, according to a US congressional source.

The Libyan port city of Sirte was flying the black flag of ISIS just last week, a sign that it is now in the hands of the Islamic extremists. The jihadists also control the airfield, creating a supply line, similar to what they have done in Iraq when Mosul was taken.

A long-time intelligence agent who works closely with American officials in Iraq warned: “Oil and drugs are how the militias are getting their money to fund their terrorism and America should be very concerned.”

Drugs, previously looked down upon in Libya, are now widespread in the country, most of it pushed by outsiders and sold on street corners by children. Libya now appears to be part of a drug route into Europe and even the US. Most of the drugs supplies come from Afghanistan while heroin comes from South America.

Drugs used to be unpopular in the country, but “all that has changed drastically as people and militias need money,” the intel agent said.

Some critics say that if the US places soldiers on the ground in the region, it should be in Libya, not in Iraq or Syria “where ISIS can be somewhat contained.”

“Everyone is now going to Libya … terrorists are coming from all over because they can move freely and the US really has nobody on the ground there. The Americans and the West need to open their eyes,” said one source who just returned from Libya.

“Libya is a mess and much worse than Iraq. ISIS has [a] very good command-and-control building in Libya,” he revealed.