You are here: Home / Europe / Libya: human traffickers use social media to advertise trips to Italy 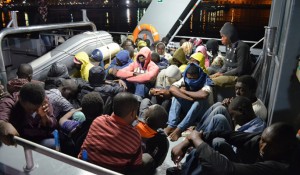 Despite the EU’s hard talk on targeting human traffickers in Libya and striking boats used to carry asylum seekers to Europe, people smugglers have not relented in their drive to entice migrants into embarking on trips to Italy, which often end in death for many.

MaltaToday is in possession of an advert posted online by a man who identified himself as Omar Zuwari, who probably hails from Syria.

In his online advert posted in late April, Zuwari wrote that a trip to Italy from Zuwara – a port city in northwestern Libya ­– would cost asylum seekers $1,000 (€890), but children travel for free.

The once discreet smugglers along the southern and eastern shores of the Mediterranean are openly publicising their contact details, prices and schedules on Twitter and Facebook to attract migrants.

Moreover, the euphemistic language and imagery used is more akin to travel agencies and tourism brochures.

Zuwari’s advert promotes a “journey from Zuwara in a 26 metre boat with a Tunisian Captain with a Thuraya mobile (satellite phone),” adding that the trip will take eight hours but “it will take another two hours to enter Italian territorial water and for the Italian boats to arrive”.

The advert – entitled ‘Trip to Italy; beginning of the week’ – was posted just days after up to 900 asylum seekers died at sea after their captain accidentally crashed their boat against a merchant rescue ship.

Some 1,750 migrants have died crossing the Mediterranean to Europe so far this year, 30 times more than during the same period in 2014, according to the International Organisation for Migration.

But the record numbers of migrants saved at sea in recent weeks, with up to 4,000 saved in a single day last month, shows that asylum seekers have not been deterred by the recent disasters.

Moreover, Zuwari’s online advert, which includes his phone number and Viber and WhatsApp contacts, includes the prices for trips from third countries to Libya.

These offers confirm the complex network of human trafficking which is run from Libya, Turkey and Europe.

Other smugglers advertise specific trips from Turkey to Greece on speedboats (starting from €1,500 per person) and bigger cargo boats to Italy (starting from €6,500, with children half-price).

More enterprising smugglers use their Facebook pages to liveblog the progress of their trips across the sea. Others create online chatrooms where migrants can share their experiences and advice.

In some cases, online adverts and pages even attempt to allay migrants’ fears over the safety of such trips. Smugglers post pictures of cruise liners and boats under headings such as “very safe” or “two floors, air-conditioned, suitable for tourists. Recommended for families.”

The EU’s external relations representative, Federica Mogherini will tomorrow seek a Security Council resolution to authorise intervention on the high seas, in Libyan territorial waters and onshore in Libya, to seize vessels.

However, the UN envoy representing the internationally recognised government based in Tobruk, Ibrahim Dabbashi, told AP that Libya rejected the EU plan and that his government “hasn’t even been consulted and rul[ed] out EU forces on Libyan soil ‘at this stage’… ‘We will not accept any boots on the ground’.”

Dabbashi also criticised expanded rescue operations: He called the idea of deploying more boats to the waters off Libya to save migrants a ‘completely stupid decision’ because it would encourage even more migrants to come to his country, further burdening local authorities.
Moreover, this week Russia signalled it would veto any UN resolution to authorise the destruction of ships in Libyan ports, effectively ruling out the legal authority the EU says it needs to mount such an operation.

“We think it’s just going too far,” Russia’s UN ambassador, Vitaly Churkin, said on the EU’s bid to destroy the vessels. “We think that we should stay within the scope of what we have, roughly what we have for the piracy situation off the coast of Somalia. We have a good precedent, so why not use it,” he said.

Libya has been largely lawless since the toppling of Muammar Gaddafi in 2011, with the country being unable to police its borders. Hundreds of thousands of migrants reach Libya in the hope of travelling to Europe by boat and the EU has been facing growing criticism for its inability to save lives at sea.

The EU’s latest plans to secure its external borders have also come under harsh criticism from humanitarian organisations.

Libya’s national salvation government in Tripoli has in the meantime announced that it will deport migrants in Libya back to their home countries.

In a high-level meeting on Wednesday, the Islamist-led Libya Dawn, which contests the authority of the government led by Abdullah al Thani in Tobruk, discussed “methods capable of ending this phenomenon.”

“The National Salvation Government is committed to take all necessary measures… of preventing the continuity of illegal immigration, and will adopt all deterring measures against the violators.”

It also said that it would cooperate with the EU and neighbouring countries to stem the flow of migration from sub-Saharan Africa.

In a statement, the Tripoli government said it had followed “with deep concern, the phenomenon of illegal immigration crossing through the Libyan territories into Europe generally and Italy particularly, leaving greater burdens suffered by the immigrants, leading in most cases to the drowning and death of vast numbers among them.”

In a meeting with interim prime minister Khalifa al Ghawi, Tripoli said it would assign the Illegal Immigration Authority to improve health and living conditions of detainees up until they are deported; finding convenient detention sites for women and children; deport the detainees to their home countries; address immigration source states, such as Mali, Niger and Somalia, and deploy armed troops to patrol the sites from where the immigrants travel.

The measures effectively prevent migrants from securing any form of access to request asylum or other forms of protection.