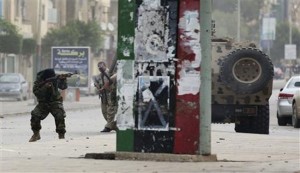 The Tripoli-based militia loyal to the unity government said “an outlawed armed group did an armed robbery to nine vehicles in the area.”

Witnesses said heavy artillery was used and loud explosions could be heard from kilometers away.

Residents had to flee their homes to avoid the fighting. There were no official reports of casualties so far.

However, Gwell’s government returned to Tripoli recently and took over some government buildings with the help of militias.