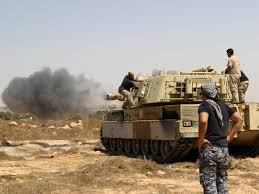 The Libyan National Army, led by Field Marshal Khalifa Haftar, struck for the second day in a row positions held by militias loyal to the Government of National Accord in the coastal city of Sirte, like reported by aawsat.com.

He accused Haftar of crippling the political process following his offensive on Tripoli on April 4. Victory is a matter of time and Haftar’s wish to enter Tripoli is inconceivable, he affirmed.

LNA’s Karama operations media center announced Sunday that in the past two days, militia positions and headquarters suffered huge material and human losses due to the strikes.

Sirte Protection Force (SPF), which is loyal to Sarraj, admitted that three airstrikes had struck the city. Local media channels quoted SPF Commander Al-Naas Abdullah as saying that gate 17 in the city’s east was targeted by four airstrikes with no human losses.

This is the second attack in a row, following a series of airstrikes on positions belonging to SPF and another civilian facility that left two people dead and five injured.