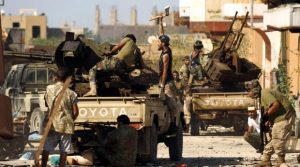 Libyan National Army forces made further progress in the battles to liberate the eastern coastal city of Derna, meanwhile Speaker of the House of Representatives, Advisor Aqilah Saleh, announced that the parliament in the eastern city of Tobruk will discuss next week a proposal to move its headquarters to Benghazi, like reported by aawsat.com.

Saleh welcomed the members’ request to move the parliament to Benghazi pointing out in a statement that according to the constitutional declaration, the parliament should be in Benghazi.

He praised what he described as “the historic role of Tobruk, which embraced the House of Representatives.” He also thanked the city of Benghazi and its people for their great sacrifices to eliminate terrorism and extremism.

Saleh stressed that the request to the House to Benghazi will be discussed during parliamentary session next Tuesday and a formal decision will be taken in accordance with the constitutional declaration. He invited all members of the council to attend the session.

Meanwhile, Commander of Libyan National Army (LNA) Marshal Khalifa Haftar met in Derna with battle commanders of Operation Dignity Battle. During the meeting, the officials discussed necessary plans to target the enemy wherever they may be.

Haftar’s office said in a brief statement that he had given instructions on fighting against “terrorists” in the coastal city.

In related news, violent clashes broke out between the national army forces and militias of Shura Council of Mujahideen in Derna, where 9 gunmen were killed and over 10 injured, according to a medical source at al-Wahda hospital.

While army forces were reported to have made “significant progress” in south of Derna, army spokesman Brigadier Ahmad al-Mismari confirmed the arrest of 21 terrorists in Derna, including six foreign nationalities.

Military officials said the army attacked targets of extremists using artillery, and confirmed the control of several areas on the outskirts of the city.

LNA besieged the town on the main road between Benghazi and Egypt and has long threatened to start ground operations there. Previous attacks were limited to air strikes and artillery shelling from time to time.

Military operation spokesman, Abdul Karim Sabra, said that the army forces are advancing on five fronts supported by air strikes and artillery shelling, while military sources confirmed that the troops advanced towards villages about four kilometers from the city.

Since mid-2015, the national army forces imposed a land and sea blockade on Derna, only allowing medical and humanitarian cases to enter or exit the city. It is the only coastal city outside the army’s control in the east of the country, as it is under the control of a coalition of extremist groups affiliated with Shura Council of Mujahideen, known for its loyalty to al-Qaeda.