You are here: Home / Mediterranean / Libya: Haftar sends a joint force to the south 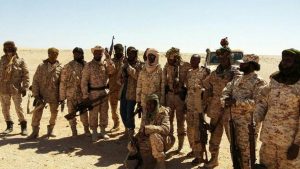 The commander of the Dignity Operation, General Khalifa Haftar, had issued a decision to form a joint force from his battalions. Haftar said that the reason for establishing this kind of force is to purge the areas of southern Libya from the gangsters that kill, kidnap, and steal, like reported by libyaprospect.com.

Haftar’s decision had raised questions about the real reasons for forming the force and sending them to the south side of Libya.

Haftar’s decision was issued after his undeclared visit to Chad and meeting the Chadian president, Idris Debi.

Observers said that the visit resulted in holding a deal between Haftar and Debi. On his side, Haftar to end the existence of the Chadian opposition in Southern Libya or capturing its leaders to hand them over to Chad. On the other hand, Debi to support Haftar politically and militarily.

The observers said that there is a dispute in the south between Haftar’s forces and the forces of the Presidential Council (PC) in parallel to the clashes with the Chadian opposition forces.

The observers asked if the French side supports the Chadian deal with Haftar. Some think that France is not only a supporter to the deal but moreover, it is the leading dealer because of the relationship between Haftar and the French on one side, and between France and Chad on the other hand.

It is noticed that this deal synchronous with the meetings of Cairo which are expected to declare the unification of the Libyan army soon.

Activists from the southern side of Libya said that Haftar aspires to control the southern areas but he has not enough strength and that is why he visited Chad to get support from Debi.

In addition to that, the activists stressed that it is not expected to see any agreements between Haftar’s forces and the PC’s forces because of the deep dispute between the two sides.

The activists thought that the existence of Haftar’s forces in the south would worsen the situation and widen the issue of clashes.