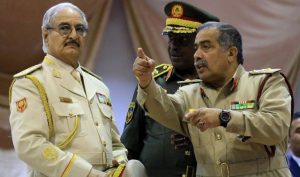 Libyan strongman Khalifa Haftar announced a military offensive to take from “terrorists” the city of Derna, the only part of the country’s east outside the control of his forces, like reported by arabnews.com.

“The zero hour has struck for the liberation of Derna,” said Haftar, declaring his troops had already started to crush the “bastions of terrorists” in the city.

Dressed in uniform, he was speaking from a military parade in the city of Benghazi in which thousands of soldiers from his self-styled army demonstrated their might.

Marshal Haftar celebrated the fourth anniversary since launching his “anti-terrorist” operation, which saw militants driven out of Benghazi — the home of Libya’s 2011 revolution.

It was his second public appearance after he returned to Benghazi two weeks ago following a long stay abroad, during which he was hospitalized in Paris.

Haftar said he had instructed his troops to spare the 150,000 residents of Derna, who have been under the control of the pro-Al-Qaeda militants called ‘ Mujahedeen Shoura Council’.
He said “peace efforts” aimed at avoiding clashes in Derna over the past three years had reached a “stalemate.”

While Haftar rules over eastern Libya, the rival Government of National Accord sits in the capital Tripoli and has the backing of the broader international community.
Haftar is accused by his rivals of wanting to establish a new military dictatorship in Libya.
Derna was known for being a bastion for militants even before the 2011 uprising that toppled and killed longtime dictator Muammar Qaddafi.

The city is the only part of eastern Libya to remain out of the control of Haftar’s Libyan National Army, which has the backing of Egypt and the United Arab Emirates.
In May 2017, Egypt carried out cross-border air strikes against militants in Derna in retaliation for a deadly attack on Coptic Christians.