You are here: Home / Mediterranean / Libya groups clash with Islamic State in east 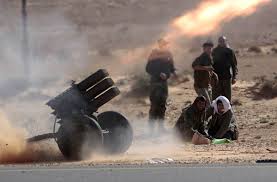 Reports of the clashes come a day after the Pentagon announced the killing of a senior ISIS jihadist in Libya in an air strike carried out by a US F-15 warplane.

Abu Nabil, also known as Wissam Najm Abd Zayd al-Zubaydi, was the senior ISIS leader in Libya and may also have been the spokesperson in a grisly video showing the execution of Coptic Christians earlier this year, Pentagon spokesperson Peter Cook said in a statemen

Libyan authorities have not commented on the US announcement, and there has been no immediate reaction to it from the Islamic State group in Libya.

ISIS, which already controls large swathes of territory in Iraq and Syria, has exploited the chaos that has spread across Libya since veteran dictator Moamer Kadhafi was toppled and killed in a 2011 uprising.

The jihadist group entered Derna a year ago but said in July it had lost control of the city after weeks of fierce fighting with members of the Mujahedeen Council of Derna.

Its gunmen ousted ISIS from many areas of the city controlled for more than a year by armed groups including Ansar al-Sharia, which is close to Al-Qaeda.

According to media reports Sunday, including Al-Nabaa television, the Mujahedeen Council of Derna has launched a new campaign to drive IS out of the region.

It said the latest clashes were taking place in Al-Fatayeh, 20km south of Derna.

ISIS, in a statement on its Twitter account, also reported that its fighters were battling “heretics” near Derna on Sunday and claimed responsibility for a suicide car bomb attack south of the city targeting “apostates”.

Since June, the jihadist group has also controlled the coastal city of Sirte, the home town of Kadhafi.