You are here: Home / Mediterranean / Libya: Government gives its version of attack on Turkish freighter 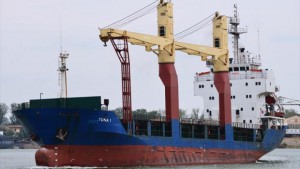 The Libyan government has published its version of the events that led Sunday’s attacks on the Turkish freighter Tuna-1,  which led to the death of one crew member and the injury of others.

The government is insisting that contrary to Turkish claims, the master of the Tuna-1 was given four separate warnings before his ship was fired on, first from the coast and then subjected to two air attacks, the second of which killed the third officer.

According to government sources in Beida, the freighter was first challenged just after 1400 hrs and asked to explain its cargo and destination.

The response, according to a report carried on Libya Al Hurra TV was that the vessel was carrying “civilian goods” and was en route to Derna.

This clashes with the Turkish government’s assertion earlier this week that the Tuna-1 was bringing a cargo of plasterboard from Spain to Tobruk, where agents were expecting its arrival. The second officer has also insisted that no warning was given before the vessel was attacked.

By contrast Beida is insisting that the Libyan Coastguard issued four separate warnings that the ship should stop, so that its papers could be inspected, or otherwise it should leave Libyan waters immediately.

It is unclear from the government’s explanation of events, if there was in fact a Coastguard vessel close to the Tuna-1 or the order to heave to was being sent from the shore.

The first message was sent at 1418 and apparently received no response. The same instruction was then repeated three more times over the next 12 minutes.

The government maintains that these signals were all ignored and the Turkish freighter continued on the same course and speed toward Derna. Yesterday air force commander Saqr Geroushi said that the vessel was carrying 60 militants from Syria.

It is unclear how soon after the final warning  that the ship was fired on from the shore. At that point it appears to have changed course away from Derna and was thereafter hit by the least one of the two Libyan air force strikes that were sent in.