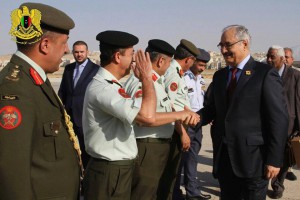 The commander of the Libyan armed forces, General Khalifa Haftar, arrived in the Jordanian capital Amman.

According the Jordanian news agency Petra, while in Jordan he was to meet with chairman of the Jordanian Joint Chiefs-of-Staff General Mishal Al-Zaben, King Abdullah’s military adviser, for talks “issues of common concern” as well as regional developments.

The visit follows the Arab League’s decision on Wednesday to authorise Arab states to provide military support to Libya for the fight against Islamic State forces in Sirte and elsewhere. The decision did not specifically state approval for Arab airstrikes against IS, which Libya had requested, but it is seen as including it.

Jordan, along with Egypt and the UAE, had strongly backed Libya’s appeal and Hafter’s visit to Amman is seen as directly linked. Following the Jordan visit, it has also been reported that Hafter would be heading to Cairo for talks with Egyptian military leaders.

Hafter last visited Amman in April when he was received by King Abdullah. Talks on that occasion focused on the threat from IS and other terrorists, potential Jordanian military support for Libya and cooperation on training.

Prior to this latest trip, Hafter was in Pakistan for talks at the country’s military General Head Quarters in Rawalpindi with Pakistani Chief of Army Staff, General Raheel Sharif. Other than an announcement that the two had discussed “matters of mutual interest”, there was no statement about the purpose of the visit.