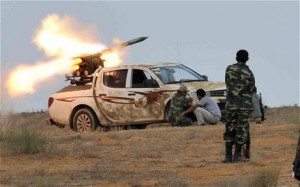 Renewed fighting broke out again south west of Tripoli in the Warshefana area and towards Gharyan, with the latter hit in air strikes.

Fighting was said to be heavy around midday near Zahra and a convoy of Dawn forces was seen heading to the near Tripoli International Airport to protect the area from any further movement by LNA forces.

In fighting some 30 kilometres west of Gharyan, at Abu Sheiba, three Gharyan fighters were killed.They have been named as field commander Mustafa Al-Talib and Mohammed Shtaiwi and Ahmed Al-Grari.

A number of missiles also landed near Gharyan causing slight material damage but no casualties.

According to Dawn it has managed to beat off and reverse a Libyan National Army (LNA) offensive. However, there were unconfirmed reports that the army had taken Zahra.

Last week, the LNA said it would launch a fresh offensive in the region within a few days.