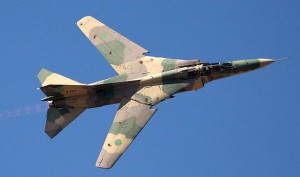 Forces allied to Libya’s eastern government carried out air strikes on Islamic State militant areas of Derna city, but an aircraft later crashed because of mechanical failure, a spokesman said on Monday.

Libyan National Army forces, led by Gen. Khalifa Haftar, carried out an air strike on the Hay Arrbamiya area of Derna, a city that has been the scene of fighting between Islamic State militants and rival Islamist fighters.

An eyewitness in the city confirmed an airstrike on Derna in the area controlled by Islamic State but could not give details on any damage or casualties.

“An aircraft of the LNA, a MiG-23, crashed due to a technical problem,” LNA local spokesman AbdulKareem Sabra said, adding it had been involved in air strikes on the city. “The pilot managed to escape and is well.”

Libya is caught in a conflict between two rival factions, each with its own government and backed by competing brigades of former rebels who once battled together against Muammar Gaddafi in their 2011 uprising.

The United Nations has backed a separate national unity government, which is still trying to gain support and traction on the ground and overcome divisions before establishing itself in Tripoli.

Air strikes by unidentified jets often target suspected Islamist militant targets, including fighters loyal to Islamic State who have been present in Derna and have a stronghold further west along the Mediterranean coast in the city of Sirte.