You are here: Home / Mediterranean / Libya: fighting resumes in Tripoli 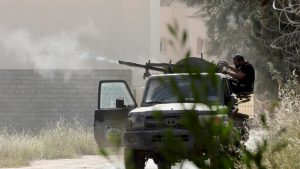 According to local media reports, Haftar and President of the Tobruk-based House of Representatives Aguila Saleh Issa have left Moscow without signing a ceasefire deal with the Tripoli-based Government of National Accord (GNA) led by Fayez al-Sarraj.

“The speaker of the House of Representatives and the commander-in-chief of the Libyan Arab armed forces left the Russian capital of Moscow and departed for Libya, without signing any agreements with the head of the unconstitutional Government of National Accord, Fayez al-Sarraj, regarding ceasefire or troop pullback from areas controlled by the army in the country’s capital Tripoli,” the Libyan News Agency (LANA), active in the East of the country, said.

The news came as hostilities resumed in the South of Tripoli. In a statement, cited by the Al-Hadath TV channel, the Libyan army has declared its “readiness and determination to win”.

A ceasefire took effect in Libya at midnight on January 12 within the framework of a joint initiative proposed by the Russian and Turkish presidents. Delegations of the sides arrived in Moscow on January 13 for talks, after which Chairman of Libya’s Government of National Accord Sarraj and Chairman of the High Council of State Khaled al-Mishri signed a draft document on the settlement in the country, while Haftar has taken a pause until Tuesday morning.

Sky News Arabia earlier reported that during the indirect talks in Moscow, Haftar insisted on allowing his troops to enter Tripoli and on forming a national unity government that would receive a vote of confidence from the Tobruk-based parliament. The field marshal also called for international monitoring of ceasefire without Turkey’s participation and demanded immediate withdrawal of mercenaries “who arrived from Syria and Turkey”.

At the same time, Sarraj wanted Haftar’s forces to retreat to positions they had occupied before April 4, 2019, when LNA announced it was advancing towards the country’s capital city. He also insisted on retaining the post of the supreme commander-in-chief of the Libyan armed forces.

According to the channel’s sources, those demands became the main bone of contention for the sides during their talks in Moscow.

Commenting on the Moscow talks, Russian Foreign Minister Sergey Lavrov stated that al-Sarraj and al-Mishri had signed a draft document on the settlement in the country, while Haftar and Issa “view this document in a positive light and asked for extra time until next morning to decide on signing.”

However, according to Abdulhamid al-Safi, a media adviser to the Speaker of the Libyan House of Representatives affiliated with LNA, no accord has so far been reached in Moscow, except for agreements on humanitarian aid. In his opinion, talks on other issues are also planned, but may not take place.

Currently, Libya has two parallel bodies of executive power: the internationally recognized GNA and Abdullah al-Thani’s interim government operating in the country’s East together with parliament and supported by Haftar’s Libyan National Army. After a standoff near Tripoli since April 4, Haftar on December 12 declared the beginning of a decisive offensive to seize the capital.