You are here: Home / Mediterranean / Libya: fears of imminent battles in the South 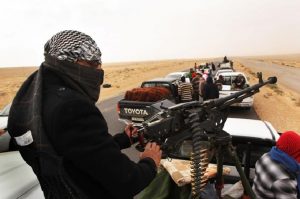 Recent developments have shown that an imminent battle might erupt at any time between the forces of the Libyan National Army (LNA), led by Field Marshal Khalifa Haftar, and forces loyal to the National Accord Government, headed by Fayez al-Sarraj, to control the south of the country, which has been witnessing security chaos since last week, like reported by aawsat.com.

A senior military official, speaking on condition of anonymity, told Asharq Al-Awsat that the LNA would launch a major offensive in the coming hours to liberate the entire southern region from what he described as mercenaries and ISIS remnants, who tried to exploit the absence of a central government in the country.

In a brief statement, Haftar said without elaborating that he had ordered his forces to launch law enforcement operations in southern Libya. The LNA had reinforced its presence by air and land in the southern region by sending droves of troops from Benina airport, east of Benghazi, to the Barak beach base two days ago.

On the other hand, Sarraj announced the formation of a military force to secure and protect the southern region from all threats and to provide the needs of his government’s forces there.

Sarraj was speaking during a meeting on Sunday night with military and security leaders to discuss the current situation in the South.

The UN-backed prime minister stressed his keenness to establish security in the southern region and to prevent foreign interference. He also said he issued instructions to support the high-level delegation formed by his government and members of parliament and state councils to “engage in effective national reconciliation among the brothers of the homeland.”

Meanwhile, Brigadier General Ahmed al-Mesmari, LNA spokesman, ruled out a military confrontation between the army and forces loyal to the Sarraj government.

In remarks to Asharq Al-Awsat, he said: “I don’t think there could be a clash between the two sides, there aren’t really any militias loyal to Sarraj in the region.”

“It is in the absolute interest of the homeland to defeat the Chadian opposition and expel it from Libyan territory,” he added.