You are here: Home / Mediterranean / Libya: Faiez Al-Serraj is the Prime Minister of new unity government 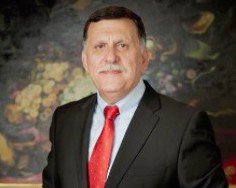 UN envoy Bernardino Leon has announced the prime minister of new unity government is Faiez Al-Serraj, the member of the House of Representatives (HoR) for the west Tripoli suburb of Hay Andalous.  He was not on the HoR’s list of nominees, or that of any other Libyan body, for the post.

In a dramatic late night announcement, Leon said he had won agreement on Serraj’s appointment from the Libya Dialogue delegates who have been negotiating the peace plan.

He said the peace plan had also been changed, to include not five but six members of a new presidential council, headed by Serraj.

Leon’s recommendations must be endorsed by both the internationally-recognised House of Representatives and the General National Congress and by 20 October.

All six will take it in turns to act as Libya’s head of state for international visits, Leon said, adding: “This will be a way to show the importance they have”.

He also announced a list of more than 20 names of prominent Libyan figures from whom he wants the new presidential council to agree to take advice.

This advice will be added to decisions by the council, which in turn will rely on advice from a new State Council, populated by the bulk of General National Congress members elected in July 2012, and, for legislation on the existing internationally-recognised parliament, the House of Representatives.

If all these groups work together, Leon promised it will be “the best government in the world,” but added “if it is not supported, no matter how good they are, it is not going to work.”

Leon is seen as taking a calculated risk in changing the terms of the draft peace plan, something he and a number of world foreign ministers insisted at the UN on Friday could not happen. It is now the second time he has changed the “final” version.

He will hope the changes will cement a peace deal that provides a highly inclusive but possibly unwieldy government structure.

Although not part of the deliberations, Leon recommended that Misratan politician Abdulrrahman Sewehli to lead the State Council. This is also a departure from Leon’s stated plan, which in Article 21 insists the State Council itself should elect its chairman at its first meeting.

This marks a sharp turnaround for the prominent Misratan. In June, the United States, backed by Britain and France, recommended that Sewehli, a longstanding British resident, be subject to an asset freeze and travel ban in a proposal to the UN, accusing him of “pressing for a Libya Dawn attack against the oil port of Sidra in February and the siege of government ministries by revolutionary militias”.

Leon will hope that the changes he has made to the plan will deliver peace, but runs the risk that both the House of Representatives and the General National Congress will reject his proposals. This will very probably trigger further demands for changes from each of them.