You are here: Home / Mediterranean / Libya, extremism, and the consequences of collapse 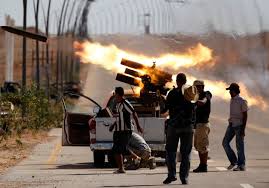 Almost four years after the revolution that toppled dictator Col. Muammar Qadhafi, the security situation in Libya remains extremely unstable. The country still hosts two rival governments—the General National Congress (GNC) in Tripoli, supported by the Libya Dawn militia; and the House of Representatives (HoR) in Tobruk, supported by the Libya National Army (LNA)—neither of which has been able to effectively exercise control over the vast Libyan territory. The political and security vacuum left by the Qadhafi regime has allowed the black market economy to flourish, and enabled criminal and violent extremist networks to establish a foothold in the country. In an in-depth report released today, The Soufan Group outlines the security implications of continued instability in Libya.

On December 17, 2015, representatives from the GNC and HoR signed a UN-brokered agreement in Morocco, pledging to form a Government of National Unity. However, on January 25, 2016, the HoR overwhelmingly rejected the deal, with only 15 of 104 members voting in favor. Opposition from powerful elements, especially Libyan National Army (LNA) commander General Khalifa Haftar, made approval of the deal unlikely. Even if a Unity government is ultimately formed—which seems unlikely due to internal divisions within the GNC and HoR—it will immediately face monumental hurdles to stabilizing and rebuilding the country. To this day, an array of militia groups—armed through widespread looting of massive weapons stockpiles—battle for control of smuggling routes, key resource hubs, and support from regional powers. Despite a period of relative calm after the tumult of the revolution—during which time oil production almost reached pre-revolution levels—the inability of the transitional government to effectively disarm these militias doomed it to failure.

With no centralized enforcement of the rule of law, criminality and warlordism have flourished. As in states like Afghanistan, Yemen, and Syria, the main benefactors of the state’s collapse have been violent extremist groups. Despite the presence of affiliates in West Africa, the Sinai, the Caucasus, and Afghanistan—among others—Libya now represents the only area outside of Iraq and Syria where the so-called Islamic State actively controls territory, having established a beachhead in the central coastal city of Sirte. The group is now aggressively expanding in all directions, seeking to take control of key energy infrastructure and trafficking routes.

The Islamic State has generated revenue from the black market smuggling networks running through the country, and is also using these routes to import fighters from neighboring countries—particularly Tunisia. Some Islamic State recruitment materials have even begun instructing aspiring foreign fighters to travel to Libya, rather than the group’s besieged positions in Iraq and Syria. The Islamic State so values its territory in Libya that it sent a senior member—Iraqi national and former Ba’athist party member Abu Nabil al-Anbari—to head the Libyan branch. Though al-Anbari was killed in a U.S. airstrike in November, his presence revealed the direct command-and-control relationship between Islamic State leadership in Syria and Iraq and the Islamic State in Libya.

Al-Qaeda has also exploited the instability in Libya to expand its North African operations. Through its regional affiliate, al-Qaeda in the Islamic Maghreb (AQIM)—and its splinter group al-Mourabitoun—the group has been active in the Sahara and Sahel regions for years. It also has a historical base of support in Libya, particularly in the eastern cities of Benghazi and Derna. Through its allegiances with the Tuareg tribes in southwestern Libya, AQIM has established its own beachhead in Libya from which to conduct its military and economic activities. Like the Islamic State, al-Qaeda is drawing revenue from the lucrative smuggling trade, and has a strong presence in the key transit hub of Ghat on the southwestern border with Algeria.

As with Jabhat al-Nusra in Syria, al-Qaeda is operating through proxies such as Ansar al-Shariah in Libya (ASL)—the group that assaulted the U.S. consulate in Benghazi—and the Abu Salim Martyrs Brigade, which now largely controls the city of Derna. Through these proxies, al-Qaeda is attempting to disguise its presence in Libya, and to integrate itself into the political future of the country. ASL is a component of the Libya Dawn militia supporting the GNC government in Tripoli. The group has even been allowed to control, operate, and draw profits from a major oil refinery in the western city of Mellitah.

Continued instability in Libya will only see these criminal and violent extremist elements entrench themselves further. The expansion of these networks within the country represents a rapidly evolving security threat to both the region and the West. Without genuine reconciliation between the rival governments in Tripoli and Tobruk, there can be no hope of building an alliance strong enough to counter the growing influence of both the Islamic State and al-Qaeda. The December 17 agreement is a good start, but there is much more work to be done before any unity government becomes a viable option.