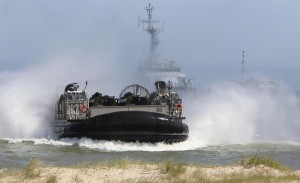 As their humanitarian response to the ongoing refugee crisis falters, European leaders are pressing the United Nations Security Council to authorized an escalated military force to pursue so-called “human smugglers” in the Mediterranean Sea’s international waters.

The effort to advance the draft resolution is, according to Foreign Policy, being led by Britain, whose government has come under fire for “turning its back” on people seeking refuge from war and poverty.

Specifically, the plan would approve military action in international waters along a route from the coast of Libya to Italy, according to reports from the New York Times on the proposal, which will soon be circulated within the UNSC.

The route is commonly used to transport people fleeing West Africa, Eritrea, and Afghanistan, while Syrians are increasingly using a pathway that passes through Turkey. According to an unnamed Security Council diplomat quoted by The New York Times, the proposal stipulates for seized boats to be taken to Italy, where the refugees aboard would then be considered for asylum.

The plan is less severe than a previous proposal, circulated by Britain last spring, that would have allowed European military forces to pursue “human smugglers” in Libyan waters and even on the country’s soil. Britain eventually abandoned the measure after failing to secure Libyan approval.

However, many have argued that military targeting of “smuggling” networks would neither deter nor help refugees, who undergo tremendous hardship and risk their lives in a bid to escape war and poverty. The UN refugee agency recently declared they do not expect the influx of refugees to Europe to slow.

Going further, many observers argue a military response is the polar opposite of the humanitarian response wealthy nations owe refugees. “A whole generation of people are putting themselves in debt to be smuggled into Europe, only to be thrown out,” UN Special Rapporteur on the Human Rights of Migrants Francois Crepeau told Al Jazeera last month. “That is a really ridiculous transfer of wealth… We can help people by giving them better options.”

The Britain-led resolution is not the only effort underway to ramp up Europe’s military response to the humanitarian crisis. The European Council agreed in May to another plan to escalate military targeting of so-called smugglers, by giving a European maritime force the power to seize vessels. The Council is continuing to press Libya to approve pursuit on their soil.

The proposed military campaigns at sea have been accompanied by parallel efforts on land, with some EU leaders already tightening borders, and Hungary moving forward with a 110-mile razor wire fence to bar refugees from entry—while also bolstering its military at the border.

What’s more, elected leaders across Europe and the world are using the humanitarian crisis to justify military escalation towards Syria, despite warnings that there is no military solution to the hardships refugees endure.